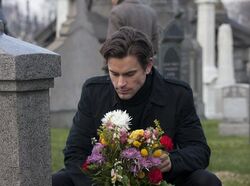 Bad Judgement is the 9th episode of Season 1 of White Collar and the 9th produced episode.

Neal Caffrey and Peter Burke arrive at work discussing their weekends when Agent Jones comes up to them to advise that David Sullivan is waiting to see him and has brought his daughter, Allison. Peter is reluctant to speak to him regarding the case and explains to Neal it’s supposed to be some sort of mortgage fraud case, he’s had a look at it but it all seems pretty cut and dry and doesn’t think there is anything to investigate.

After a quick chat with Sullivan and a nicely played “sympathy card” by his daughter, Peter agrees to take another look at the case, but makes “no promises”. While reviewing the case brief, Peter realizes the last person working on the case has retired… at age 35. This raises his suspicion and he and Neal arrange to meet him for coffee. Herrera is reserved and un-helpful, not giving any information, saying it was a dead case and goes to leave thanking them for the coffee. He turns back to the table and makes a point of insisting on leaving a “tip”. He leaves $4.76 – a very specific amount which Neal and Peter decide must mean something.

Back at the office, Peter and Neal are going through the old case files looking for any reference to the numbers 476. Peter figures out it is an ID number for a federal district judge. The ID number is stamped on the paperwork for every case a judge presides over.

Mozzie has been doing some digging and reports to Neal that Judge 476, “MC” was Fowler’s “go-to” guy when getting all the paperwork against Neal during the diamond heist. Neal wants to let Peter know straight away but Mozzie convinces him to hold off on telling “The Suit” (Peter) for a little while. Neal feels this is what he can use against Fowler to get to Kate, but Mozzie, like Peter, thinks he and Kate may be working together.

In the office Peter gets a call from Elizabeth asking him home for lunch to try a new caterer. She also invites Neal for his refined palette. The taste test begins and food is rated well below par and then Peter notices two mugs on the table. Elizabeth says they are from the cable guy who called to explain the cable was out and they could fix it straight away. She checked with the neighbours whose cable had also gone out and thought it was safe to let him in. Neal and Peter both think it is rather convenient that they came out so quickly and suspect a bug. Neal makes small talk with Elizabeth while Peter checks the cable box, finding a bug and then smashing it under his foot.

thumb|200px|left|"Find That Bug" Neal offers the services of his “Cleaner”, ie; Mozzie. Peter is hesitant but relents as long as someone watches the “Cleaner”. Mozzie arrives with a case full of gadgets, Jones arrives to watch Mozzie and Neal arrives from having been out, Elizabeth thanks him for walking, a Labrador, “Satch”. Mozzie commences “cleaning”.

Neal and Peter walk back to the office discussing how they are going to get the Judge, then Fowler. Upon their return Fowler comes into the office; he claims to have some work to do in the branch office.

Upon examining the mortgage papers, Neal spots the signature for a forgery.

Peter goes to visit the Judge, Michelle Clark in her office, without Neal. He confronts her for the suspicious connection between several of her cases. She turns the conversation into a discussion of figures and offers a bribe of $250,000. Peter says it might be worth discussing and they make an arrangement to discuss details further. When Peter leaves the office, Judge Clark turns around to her bookshelf and pulls out a video recorder. She calls Fowler and says he can have the tape, but only after the “Mortgage Case” is sealed.

Reese Hughes makes a house call to Peter’s home to give him a heads up that OPR launched an investigation into Peter’s professional conduct and Fowler has got him on video accepting a bribe. Peter heads into the office to get to work and try to stay a step ahead of OPR. His team surprises him by coming in to help out.

Mozzie has a note for Neal, an envelope with a chess move on it. The move is an open move with a black piece instead of a traditional white open. Neal doesn't think it is from Kate as she hates chess. While contemplating the meaning of this, there is a knock on the door. Having realised the gravity of the situation, Elizabeth has arrived to ask Mozzie and Neal to break into the Judge’s chambers and steal the incriminating tape. Acknowledging the dangers involved, they accept the challenge and form a plan.

Peter and his team start making connections between the cases but then get shut out of the files (this being Fowler sealing the cases as part of his bargain with Judge Clark). Peter makes another call on Herrera and explains how close he is to get him to help a bit more and tell him what he knows about the money trail. Herrera says when he was investigating he got shut down once he tried to get a warrant for the Judge’s Chambers, Federal Property being a perfectly private place to hide an illegal stash of cash. Just as Neal is completing the video sabotage plan with Mozzie he receives a call from Peter updating him on this new information. As is typical of his personality, Neal gets an idea and takes the situation into his own hands for a while. He breaks into the Judge’s office and stirs things up as if someone has been searching for something. He plants a listening device and then dashes outside to meet Mozzie and listen in. Just as Neal had suspected, the faux search of the office gives Judge Clark the heebie-jeebies and she thinks her position is compromised. Neal and Mozzie hear her talking with her personal assistant working out that they will need to move everything to a safety deposit box at First National at noon the next day.

Fowler brings his “evidence” on the video tape into Reece’s office and inserts the tape into a VCR. Peter, Reece and Fowler wait…. The tape is blank. Reece reprimands Fowler for wasting his time and Fowler storms out of the office. Peter goes downstairs to meet Neal and thanks him for his help. Neal denies any knowledge of this, then says Peter should thank his wife.

Getting back to business they exchange information, working out how they can use Neal’s illegally obtained information about the deposit box to their advantage and get the Judge into custody and Fowler off Peter’s back. Peter gets an idea.

Knowing Fowler is bugging Peter's phone, Peter and Neal make a rehearsed call baiting him. Falling for the trick, Fowler goes to intercept what he thinks is the bribe handover between Peter and Judge Clark. However Peter has actually set the situation up as an arrest of the Judge by Agent Fowler. Fowler can’t explain himself out of the situation without incriminating himself and so goes with Peter on the arrest. The case winds up with Fowler making an extremely generous deal with the Judge but Peter and Neal are just happy Fowler has lost his Judge contact and Sullivan has his house back.

Back at the Burke house, Mozzie has completed the “cleaning” and Elizabeth walks him out. Peter and Neal talk about what a mixed victory this whole case had been Neal is forced into admitting he does not have the “music box”. In return Peter confesses he has heard back from Kate, the message: “See Robert”. Neal expresses this could be difficult seeing as Robert is Kate’s deceased father.

Following the clue, Neal and Peter head to the cemetery where Robert Moreau is buried and visit his tombstone. There is a bouquet of flowers, only a few days old. Neal and Mozzie notice a paper flower from Kate hidden in the flower bouquet. They keep this new clue from Peter and the three leave the cemetery.

Peter (to Neal): "My wife’s inviting you to lunch. Good thing is I get to come too."

Elizabeth: "I don’t think they bugged the dog."
Mozzie: "Amateur"

(to ): "We stop the judge from taking the Sullivan home, then we get her disrobed.":