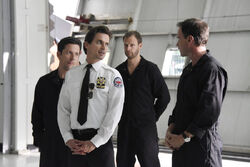 Au Revoir is the 6th episode of Season 6 of the series, the 81st produced episode and the Series Finale.

In order to help Neal carry out a risky heist, Peter must involve himself in a dangerous con against the Pink Panthers, putting El at unease with their new baby on the way. Meanwhile, Neal designs a new plan that will serve the interest of the Pink Panthers – and himself.

Final scene shot near Wall Street in NYC, not Paris.