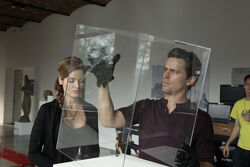 Ancient History is the 8th episode of Season 4 of the series and the 54th produced episode.

In an episode that features Alex Hunter's return, Peter and his team investigate a series of museum heists targeting rare ancient artifacts.

Neal's former lover/friend/thief Alex returns to ask for Neal's help when the FBI begins investigating her in relation to a heist for which Neal was arrested. Meanwhile, Peter begins his own investigation into this new character Sam after Neal receives a suspicious package from Ellen delivered by the Marshalls. Neal is unaware that Peter is investigating him. Later, Neal, Peter, and Mozzie all discover that Alex has also returned to town for more business, which causes a rift between the trio. Neal imitates Banksy, a high-profile graffiti artist who is known for his anonymity.