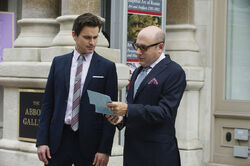 All's Fair is the 4th episode of Season 6 of the series and the 79th produced episode.

With the Pink Panthers having gone silent, Peter and Neal focus on a case dealing with someone from Mozzie’s past, who’s returned to tie up loose ends and pull another con, this one at Mozzie's expense.